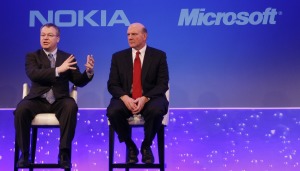 Stephen Elop CEO of Nokia, left, with CEO of Microsoft Steve Ballmer, speaking in London, as he announces the strategic partnership with Microsoft, Friday, Feb. 11, 2011. Technology titans Nokia and Microsoft are combining forces to create smart phones that might challenge rivals like Apple and Google and revive their own fortunes in a market they have struggled to keep up with.Nokia Corp., the world’s largest maker of mobile phones, said Friday it plans to use Microsoft Corp.’s Windows Phone software as the main platform for its smart phones in an effort to pull market share away from Apple’s iPhone and Android, Google’s software for phones and tablets. Nokia said it will help drive the future of Windows Phone “innovating on top of the platform in areas such as imaging, where Nokia is a market leader.”(AP Photo/Alastair Grant)