The Samsung Galaxy A7 arrives with a 5.5-inch Super AMOLED display which is designed to deliver rich colours, sharpness and high clarity thanks to full-HD resolution (1,080 x 1,920 pixels) leading to a pixel density of 401ppi.

For driving its processes, the Samsung Galaxy A7 is packed with a 64-bit Qualcomm MSM8939 Snapdragon 615 chipset housing four cores of 1.5GHz and four cores of 1GHz. Equally powerful is the 2GB RAM assisting it. The Adreno 405 GPU handles intensive games and movies smoothly. Such a powerful configuration is capable of making light of anything you throw at it. It ships with Android v4.4, a.k.a. KitKat OS. 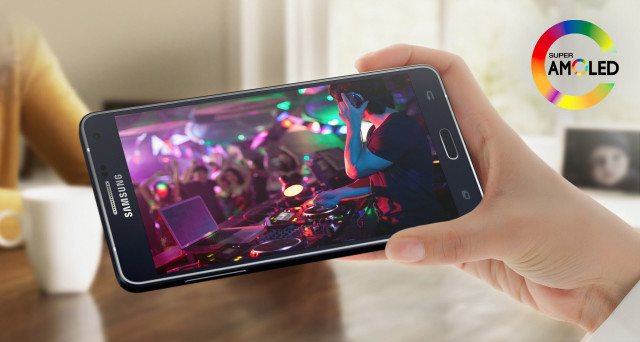 The main camera of the Samsung Galaxy A7 captures 13MP stills and supports features like autofocus, LED flash, touch to focus, geo-tagging and others. You can also shoot full HD videos at 30fps with this camera. At the front panel, there is a 5MP snapper which will surely win the hearts of selfie lovers. Internally, the device comes with 16GB of memory out of which the user access 12GB. It also has a microSD slot capable of taking in cards up to 64GB.

The Samsung Galaxy A7 is one of the most awaited smartphones from the Korean mobile giant. It flaunts a superb display backed by a beastly configuration. But then that’s what you expect in this price range. It also impresses with its excellent cameras, sound storage and latest connectivity features.